You may want to listen to music in your car every once in a while, or you may listen every time you get in. Doing it isn’t a very difficult thing: You simply need to connect your smartphone to the car’s media system or just use your memory card. That wouldn’t quite work with a car with an older cassette player, however.

Fortunately, you don’t really have to go and get a modern media system for your car. Via a simple device called a cassette adapter, you can connect your smartphone to an old cassette player. That’s certainly cheaper than getting a new music player with memory card support!

If that’s the thing you may want to have, then have a look at our reviews of 5 great cassette adapters!

Philips CD/Cassette converter isn’t the most expensive product on our list, but it delivers quite a clear, high-quality sound with defined mid- and high-frequencies. It should provide an excellent balance of sound quality, durability, and functionality.

The CD/Cassette Converter is designed to work with auto reverse decks. Apart from that, the 3 cord positions should allow you to reliably deal with front- and side-loaded cassette players. The cord is, by the way, 6 feet long, which should be more than enough for convenient use.

When it comes to durability, the CD/Cassette Converter probably won’t be as durable as Monster’s adapter. However, you should feel more confident with this product, since Philips backs it up with a lifetime warranty.

This cassette adapter has one notable downside: It has the familiar side-facing plug. While not everyone has bulky smartphone cases, those who have them may face some problems with the plug. 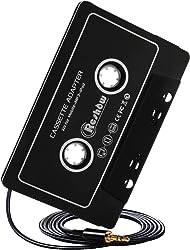 This cassette adapter is fairly similar to the Carismatic Universal adapter we reviewed previously, but this one should be slightly more durable. This one costs a bit more and also weighs 2.56 ounces, which could be a good indication of better materials.

Another advantage of this cassette adapter is that its 3.5 mm plug is straight, making it much less likely to interfere with smartphone cases.

Like Carismatic’s adapter, this one also has an adjustable cord position that supports several types of decks.

What could be decisive for you is that this cassette adapter is covered by a 30-day money back guarantee, so you can return it if you don’t like it. 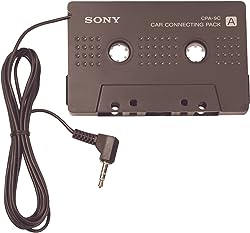 If you by chance have an old Sony MD or CD Walkman player, then you might want to take a look at Sony’s cassette adapter since it was designed for those devices specifically. Even if you have other devices with a 3.5 mm connector, this adapter would probably work with them as well.

What makes this product stand out most is the positioning of its cord, which makes this cassette adapter compatible with side-loaded decks. However, when we say “stand out,” we don’t mean that it is better, since this adapter works only with side-loaded decks because the cord cannot be readjusted. However, if you have such a deck, you shouldn’t have any issues with Sony’s cassette adapter.

Sony’s adapter is well built and provides quite good sound. You need to note that this device may have noticeable background fuzz that could be reduced if you tweak your smartphone’s and deck’s volumes right.

If you are looking for a good, inexpensive cassette adapter, then the Carismatic Universal Audio Cassette Adapter may be the right pick for you. It is quite cheap yet boasts some features absent from some of the other adapters we examined.

First, this adapter only weighs 1.6 ounces. While cassette adapters don’t really get very heavy, it is nice to have a lightweight adapter if you usually carry numerous other things with you.

The universal adapter has a 48-inch long cord. The cord can be adjusted to several positions for compatibility with both side- and front-loading cassette players. Be aware, though, that the side-facing 3.5 mm plug could interfere with thick smartphone cases.

Because this is an inexpensive cassette adapter, it probably won’t last very long. Its lightness could indirectly indicate that its materials are flimsy, so keep that in mind.

If you want to get a high-quality cassette adapter with good sound quality, then Monster iCarPlay Cassette Adapter could be the best choice for you. Although this adapter is designed for iPods and iPhones specifically, it should work with Android devices and other hardware with 3.5 mm connectors.

For the price, you should expect very good quality from the iCarPlay adapter. The black body of the adapter with red accents make this adapter quite attractive.

The sound should also be top-notch, though you may catch a bit of static here and there. Static, unfortunately, is a thing that can’t be really eliminated with cassette adapters.

The cord of this cassette adapter can be adjusted for different positions so it has compatibility with both side- and front-loading players. The cord is 3 feet long, which is shorter than the cords of the other adapters we reviewed, but it should be more than enough. The jack is also straight, making it easier to fit into smartphones with bulky cases.

It’s important to keep in mind that this product is currently discontinued, so you probably won’t be able to get any support from Monster if you happen to face any issues.

Some posts may contain affiliate links. Automechanicknows.com is a participant in the Amazon Services LLC Associates Program, an affiliate advertising program designed to provide a means for sites to earn advertising fees by advertising and linking to Amazon.com.
Scroll back to top
We use cookies to ensure that we give you the best experience on our website. If you continue to use this site we will assume that you are happy with it.Ok